The Unsent Project is an excellent collection of over one million unsent text messages to first loved ones. Messages are sent anonymously by people around the world.

However, Rora Blue started the Unsent Project in 2015 to find out what color people see love in.

To investigate this, submissions are shown in the color that the sender associates with their first love.

Also, the Unsent Project has been featured in media such as The Huffington Post, Teen Vogue, Cosmopolitan, Refinery 29, Women’s Health, and Good Morning Americ

Remember, at 3 a.m., the only thing you could think about was whether or not to text this * one * person to delete them? 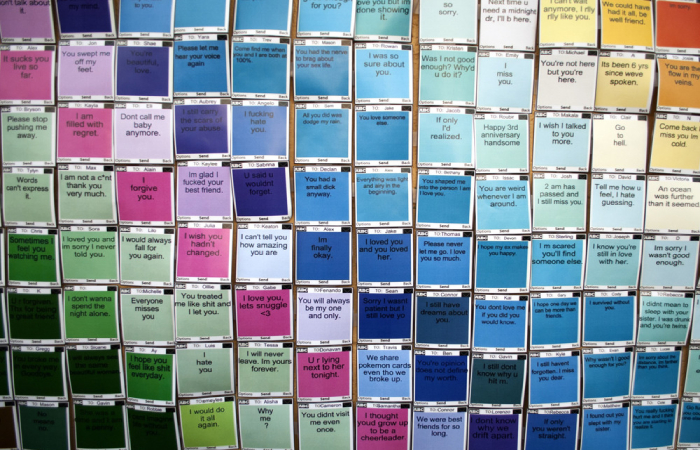 You do not need to think or worry about that now as you can hit the submit button with a website called “The Unsent Project.”

Rora Blue, the mastermind behind The Unsent Project, explores what we want to say to others and how we associate colors with our feelings. The Unsent Project has collected more than 500,000 unsent text messages from anonymous users.

The entries are diverse and encompass almost all of the emotions sent to lovers, best friends, exes, parents, siblings, and even pets.

All texts are contributing and storing digitally in an online file that is accessible to everyone.

In an interview, Blue said that she didn’t expect this to resonate with many people.

“The Unsent Project was born in a place where I processed my own experiences with my first love.

I wanted to get in touch with other people and learn about their experiences.” 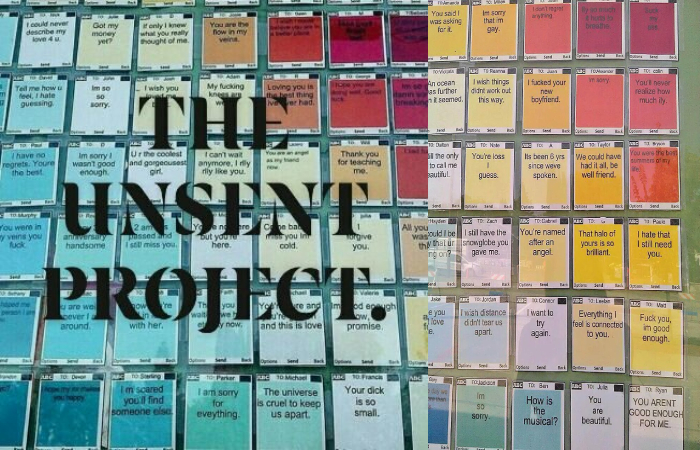 In all honesty, I hve no idea that it was a concept that would resonate with so many people.

Also, “it felt wonderful to be able to give other people a place where they can express themselves anonymously,” he said.

Blue also pointed out that colors have always generated different emotions in her. It made him curious to know how others see color concerning emotions.

“Do we as humans have a different and collective emotional experience of different colors?

Also, I can look at all the texts sent in a certain color and see if the messages have a similar emotional tone. So far, I can see that it is,” added Blue.

In a two-part TikTok video, the Blue recalled how the entire project began.

It started in 2015. At first, it was a search for his Tumblr followers.

When he started receiving many anonymous messages, each with its message and the color that identified them with loved ones, he tried to print them out one by one.

He moved away from Tumblr to launch the undersubscribed project website in 2019 after gaining traction and discovering he couldn’t print all of the posts.

Many Twitter users have expressed their love of reading news from the website and have even tried to search for messages written for specific people.

DISCLAIMER: At Techies In, all views and opinions expressed in this post are solely those of the contributor. It assumes no liability for any error in the content of this material. Got something that you want to share with the world? Get a chance to share your excellent comments with the world through our site.

Wake Me Up In 45 Minutes

The Essential Reasons: Why You Should Include a Tracksuit in Your Wardrobe?

Techies In, 5 months ago